This was his first official trip off the farm since he was imported from Denmark in May of 2013 as a weanling. Over the three days Sanders Salik (AKA. Sinclair, or more affectionately- 'Si') handled himself very well and by the end was certainly showing off for the crowd.

Of his performance, "Yesterday [March 7th], during his arena time he was very alert, but still respectful. We had a moment of nervous excitement when everyone started clapping but he quickly calmed down for the exit." Said owner of the bay leopard colt.

According to Amy, by the second day [March 8th], "He was much more relaxed when we entered [the arena]." Sanders Salik apparently has the typical Knabstrupper personality. Amy noted that even before everyone started clapping, he was at the center of the ring nodding his head in approval. "Then, as we walked back, he decided to show of his favorite move- the passage!"

She recalled with a chuckle, "It was not exactly perfect, but a great rough draft..." and then continued, "...everyone loved it, so he tried to get a little bigger with it! When we got to the gate he stopped and calmly walked back." By the end of the day Sanders Salik was certainly in his element. "He LOVES the attention because he certainly was showing off like a peacock!!!"

The last day [March 9th] there was a bit more nervous excitement in the arena when two horses, which hadn't been seen in the previous two days, were found hiding in the corner. He took a nap in his stall before taking the trip back home and handled the cold, windy, traffic filled trip to be loaded into the trailer like any respectable Knabbie would- brave, sensible, and without any problems. 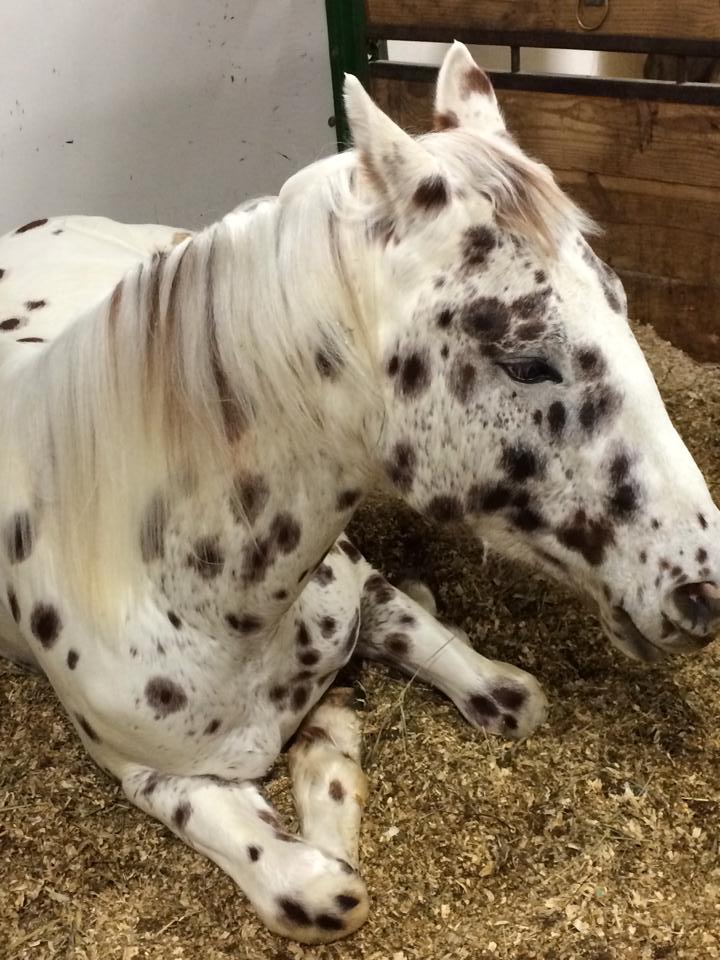 Sanders Salik taking a nap after a long weekend.

Si's owner is really proud of her 'little man', who at 21 months old already stands somewhere over 15.2hh, and will not finish growing until age six. "I haven't done terribly much marketing on him yet because he is not yet a licensed stallion due to his age [Must be at least two-and-a-half before eligible for a (limited) breeding license with the KNN], but I am starting to put the word out."

Sanders Salik is the first Knabstrupper residence and stallion prospect in Michigan. You can keep up with him on Facebook and Twitter (@AAEqCenter)!