We'd like to put the spotlight on the lovely 2013 colt, D'Artagnan Skrodstrup (Colorado Skrodstrup x Gala Moonshadow), who is bred & owned by Adrienne Mitchell. 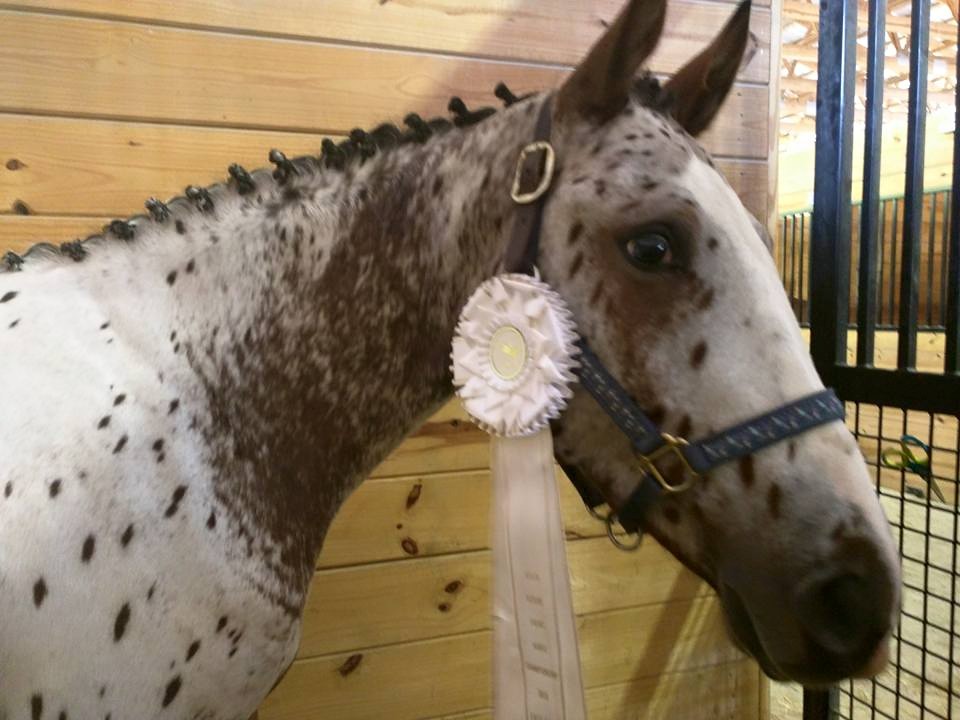 D'Artagnan placed 4th in the 2015 USEA Future Event Horse East Coast Championship- 2 Year Old Class (handled by Klaus Shengber) October 8th, 2015 at the The Maryland Horse Trials at Loch Moy Farm II.  He was the only Knabstrupper in attendance.

According to his owner,

"He qualified for the FEH East Coast Championships his first try in July and also did a USEA jump chute clinic where he got a fabulous reception and comments from Robin Walker.  He jumped through the chute cleanly, showing incredible scope, and it appears that he has a good shot at becoming an upper level event horse. . . He is for sale and has been in full time professional training since June 2014. He is going under saddle lightly and in November will be doing a 30 day boot camp focusing on hacking out quietly as well as ring work. . . I would like to see him in a show home doing dressage, eventing, or jumpers at a high level of sport, and while his personality is amateur friendly, he would be best suited for a serious competitor."

It should probably come as no surprise. Colorado Skrodstrup, D'Artagnan's sire, made history in 2010 by becoming the first Knabstrupper stallion in America to have successfully completed a 70 Day or 100 Day Stallion Testing in North America, finishing 3rd in Dressage and 5th overall against a very impressive group of warmblood stallions. Dart's dam, an unraced Thoroughbred, won several prestigious steeplechases at the fourth level in addition to showing rated hunters on the HITS circuit and elsewhere. 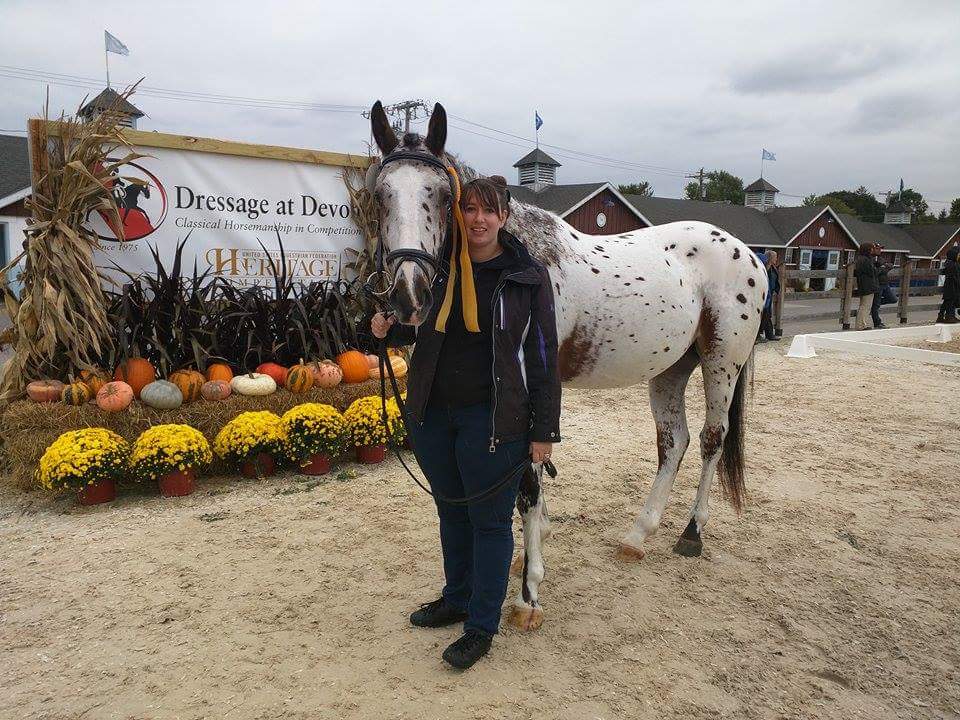 This colt also attended Dressage at Devon this year (September 29th - October 4th) as one of only three Knabstruppers at the event. Dart placed third (with a score of 73%) in the Knabstrupper Individual Breed Class (handled by Bill Payne) and 10th (with a score of 73.3%) in the 2015 USDF Prospects In-Hand Two-year-old Colts and Geldings Class- which was also against other traditional breeds. 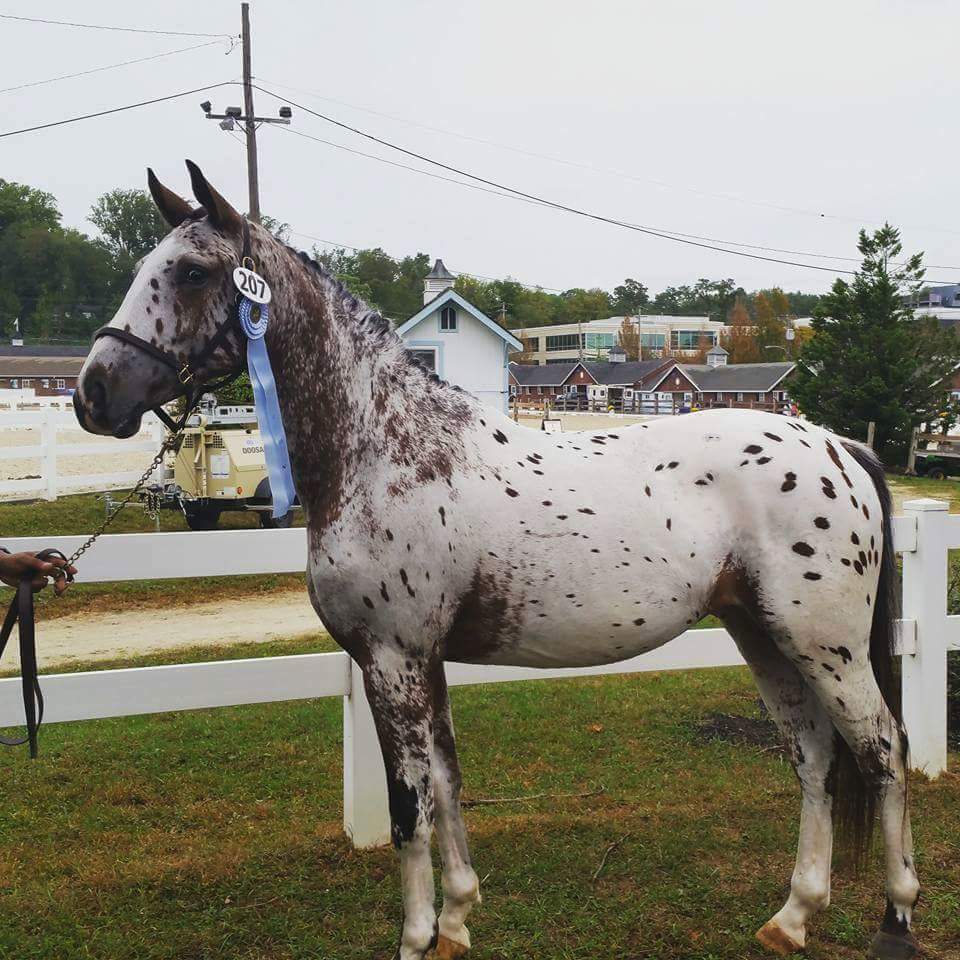 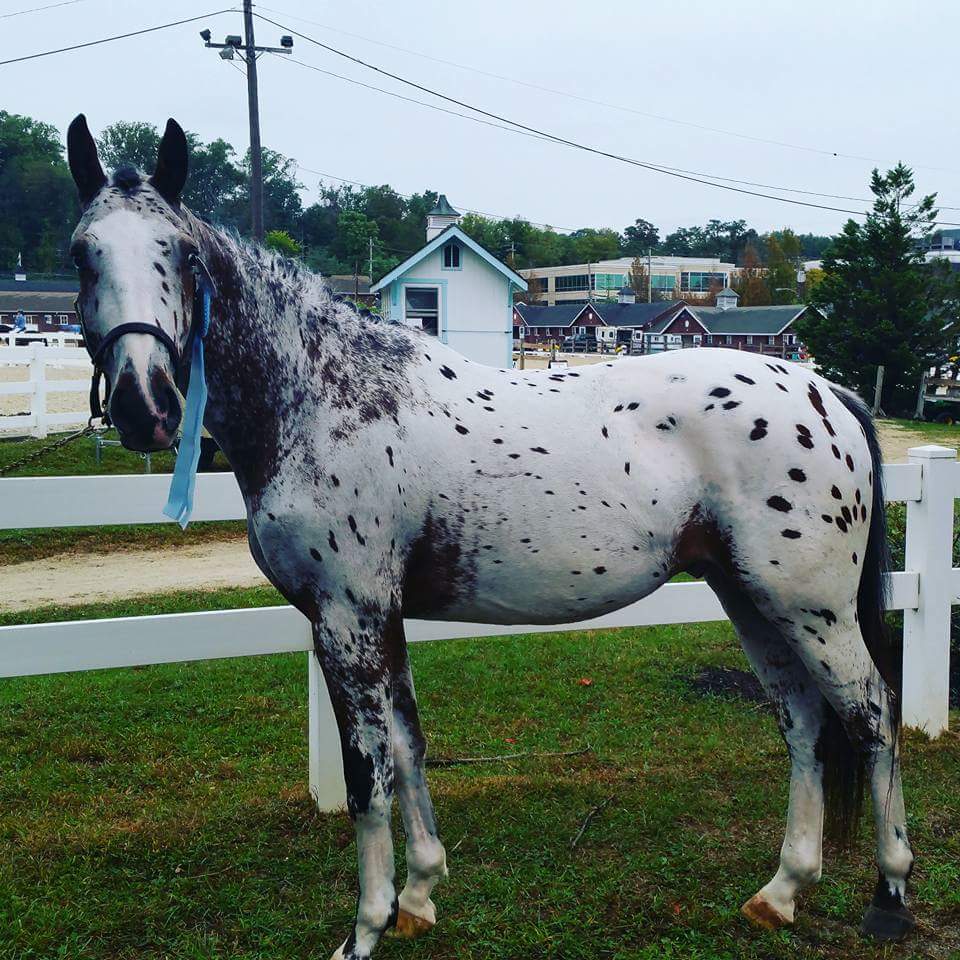 Last year at Dressage at Devon, Dart was the winner (76% Score) of a large Knabstrupper Individual Breed Class, 3rd (74.4%) in the Rheinland Pfalz-Saar IBC, and 9th (70%) in the USDF Prospects In-Hand Class as a yearling (handled by Bill Payne).