While at the Virginia site during the 2015 Kåring (Danish for 'grading') Tour, The Knabstrupper Network was able to see in person, Canada's first fewspot Knabstrupper stallion- Lindegaards Elliot. This young stallion was imported earlier that same year from Denmark by the Ontario based Tiara Equine owned by Meagan Maloney. 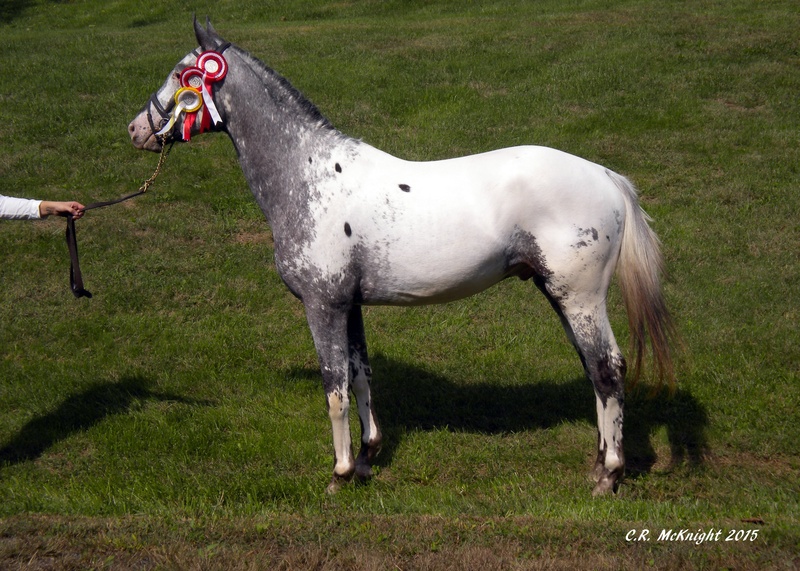 Lindegaards Elliot (John Wayne KNN 155 x Elmegaardens Efrodite KNN 2371) was presented to the judges for his preliminary breeding license and awarded Best Stallion as well as Site Champion.  He is one of only two KNN approved Knabstrupper stallions in Canada and is the only homozygous Knabstrupper stallion standing in Canada. 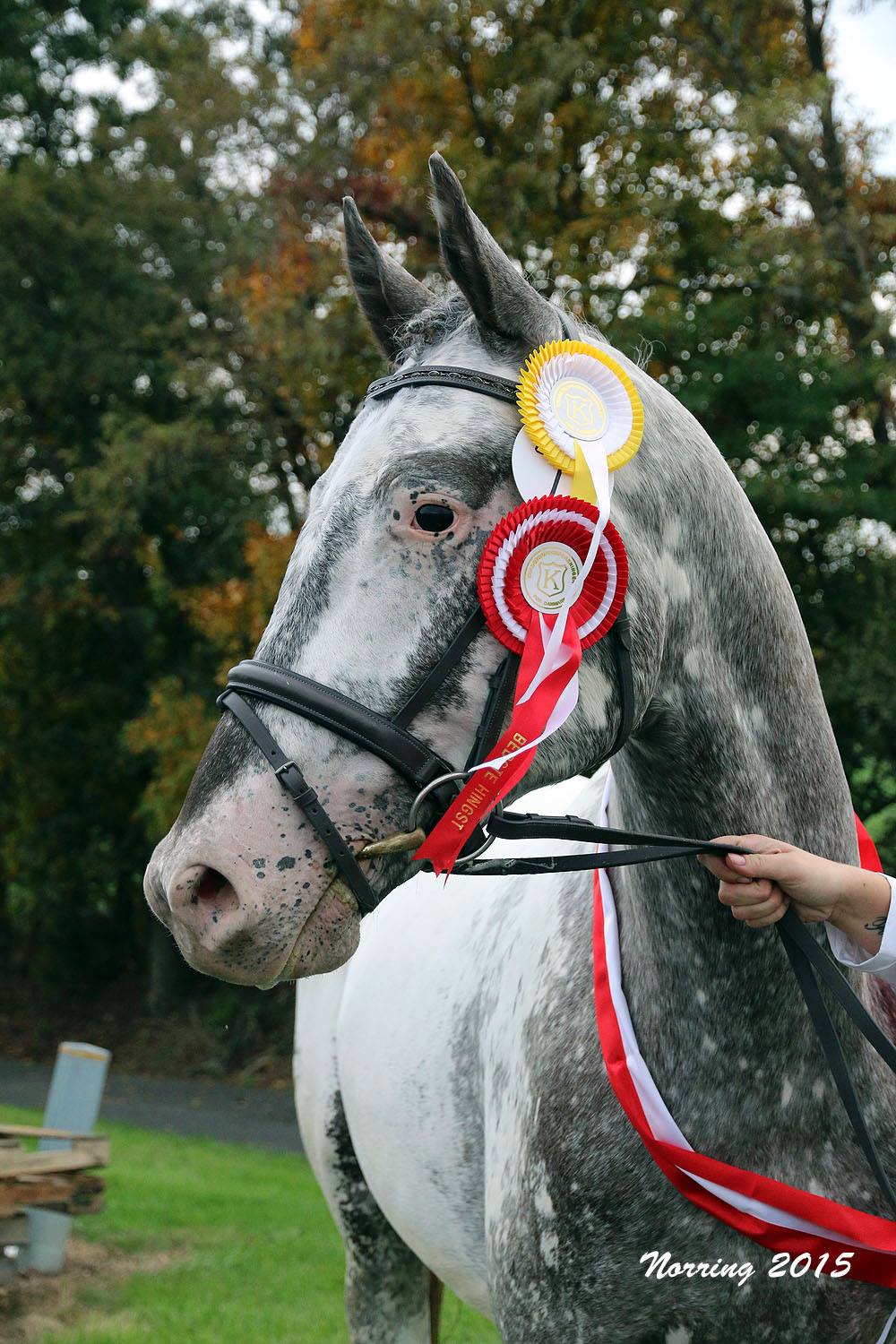 Knabstruppers are a rare breed worldwide, it's numbers in North America are in the low hundreds, but Canada in particular only has breed numbers in the teens.  We asked Elliot's owner, Meagan, what first drew her to this seemingly obscure breed.

"I grew up a horse crazy kid who obsessed over breed books and really anything horsey I could get my hands on. To this day I can picture the black and white leopard spotted Knabstrupper featured to show case the breed in this book. My very first eventer at age 11 was a very athletic 16.2 Appaloosa thoroughbred mare with a very loud blanket, who not only was noticed at shows but gave me the utmost of confidence going cross country. She cemented my love for a good brain, athleticism and color!

In 2005 I broke my neck while upper level eventing and did not expect to come back to riding. Since then, I surprised everyone with my shocking recovery and I have devoted myself to developing "safe, sane and sensible" amateur horses, and teaching people to ride safely with good basics. While I still develop lower level eventers, I am pursuing dressage and hoping to represent Canada on the world stage - ideally on a Knabstrupper.

I have always strived to showcase the more unconventional horses. My barn is full of Dutch Harness', Rocky Mountains, and now I've added two Knabstruppers to the mix. The Knabstrupper seemed to perfectly fit the mold of what I was attempting to produce, in regards to athleticism combined with a great mind." 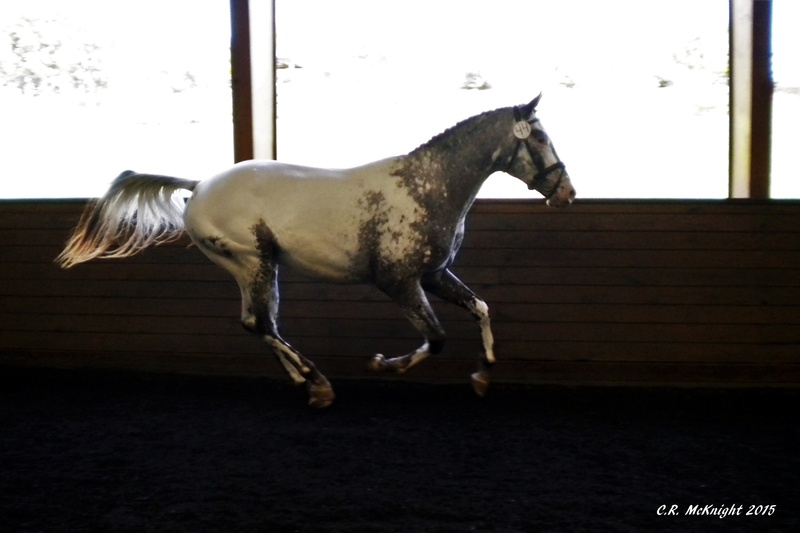 And as to how She came to import, not only two Knabstruppers (Tiara Equine is also the owner of Sartors Jet-Set), but also a stallion prospect:

"Last winter I managed to finance a trip to Europe to find the right horse for me. I visited Denmark, Prague and Germany as I didn't find anything in North America that was tall enough for me (I'm 6'1) and despite the fact I went overseas looking for a few spot mare, or a riding age stallion, Elliot wowed me with his movement and his temperament. In a strange fluke, my palet of horses fell through so I purchased Jet-Set as well, from just a video so Elliot would not travel alone.

I hope to pursue low level eventing, and upper level dressage with both horses. I am a rider who loves introducing the country to unconventional breeds as I have with the Dutch harness and I am very excited to introduce the knab to Canada. I am eager to cross Elliot with a few top quality Dutch Harness mares who offer good height, substance, excellent hock action, and a fantastic uphill build along with a great mind.

Elliot is a real character who is in your face and goofy, but very trainable. A few days ago we did our first lunging session ever, and I actually had to contact his breeder [Anja Lindegaard] after to check whether on not she had ever lunged him. He came out so focused and ready to work, and almost inherently aware of the expectations of lunging, I couldn't believe he had never done it before. I just can't wait until I can get him in the show ring and see what he produces." 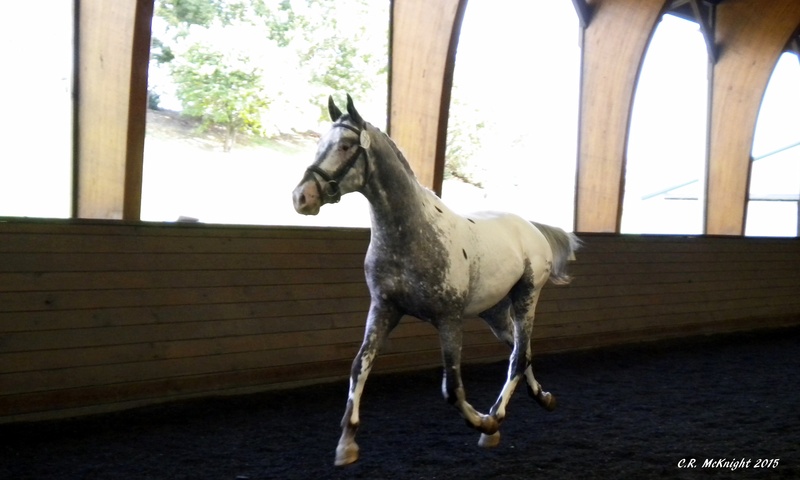 For those unfamiliar with Lindegaards Elliot's pedigree (this writer has had a horsey crush on John Wayne for years, but he is a relatively unknown sire... especially in North America) his late grandsire, Felix KNN 140, has a few KNN approved (damline) grandson's standing at stud internationally, and hidden away in the states (mainly Virginia & Florida by a private stud) there are a several Knabstruppers that carry his bloodline as well. He is also the first Knabstrupper in North America to carry Hermes KNN 99 in his pedigree!

A part of Elliot's pedigree that may be more recognizable to our readers is that of Tilde af Elmegården [by Don Ibrahim]. Elliot's dam, Elmegaardens Efrodite [by Underworld xx] shares the same dam [Tilde af Elmegården] as Elmegaardens Affair. Affair is the imported Three-Day Eventing Knabstrupper mare in Ohio who was ranked #22 Novice Horse on the USEA leaderboards in 2014 and helped lead her rider to the number one Young Adult Rider at Novice Level in their first year together in the discipline. We have covered several of her stories here on the KnabNet!

Elliots unique bloodlines, along with his Leopard (Lp) gene homozygosity, make him a very welcome addition to our small North American breed community. His owner intends to present him at the next KNN Tour in 2017 for his ridden performance test (and presumably Lifetime Approvel). In the meantime, they look forward to breeding him to select mares in 2016 and seeing his first foals in 2017. He is available in 2016 to KNN approved mares via chilled semen within Canada and the states.

You can keep up-to-date on Lindegaards Elliot by 'Liking' his Facebook page!

Reply best online essay writing service
11:55 AM on February 13, 2021
Why people still make use of to read news papers when in this technological world aall is presented on net?

Reply best online essay writing service
11:54 AM on February 13, 2021
Why people still make use of to read news ppers when in this technological world all is presented on net?